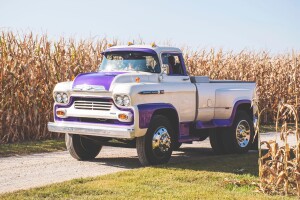 CLICK HERE TO WATCH THE LIVE STREAM OF THE FUNERAL

Lester Dean Miller, 85, of Ligonier, died at 12:54 pm on Friday, May 13 at Avalon Village Nursing Care, Ligonier. He was born on November 30, 1936, in Middlebury, to Amos and Della Dora (Lantz) Miller. On November 27, 1955, in Ligonier, he married Marilyn Moser, she survives. Survivors in addition to his wife are three children, Robin (Joyce) Miller of Ligonier, Kristen (Dale) Cox of Bradenton, FL, Tim (Tracy) Miller of Ligonier; seven grandchildren, Lorielle (Pete) Phares, Robin (Ben) Bickle, Joel (Luci) Cox, Joshua (Hayley) Cox, Reed (Kalynn) Miller, Tara Miller (fiancé Brandon Pruitt), Tori Miller (fiancé Andrew Hagerman); six great-grandchildren, Nichelle and Nevin Phares, Benton and Aubin Bickle, and Charlotte and Christopher Cooper-Cox; brother, Lowell (Lee) Miller of Middlebury. He was preceded in death by his parents and a sister, Joyce M. Cripe. Lester was a member of the Elks, Studebaker Drivers Club Inc., and Aircraft Owners and Pilots Association (AOPA). He began working with his father at Miller's Garage in Middlebury. He then became owner operator of a Case dealership, drove for Cardinal Bus, and served as vice president of engineering at Starcraft. He was a co-founder of Rockwood and owner operator of Solar Boats. Lester then worked in the engineering department at Terry Bass Boats, Bremen Sport Equipment, Chris-Craft, Wheeled Coach, Coachmen, Road Quest, and Fabwell Inc. He liked flying his plane and in retirement he was a farmer and loved going to truck shows. Lester also enjoyed attending sporting events of his grandchildren and great-grandchildren and he and his wife wintered for many years in Sarasota/Bradenton, FL. Visitation will be from 3:00 - 7:00 pm on Tuesday, May 17 at Miller-Stewart Funeral Home, 1003 South Main Street, Middlebury. Funeral services will be at 10:00 am on Wednesday, May 18 also at the funeral home. Services will be conducted by Pastor Tamra Gerber. Burial will be in Grace Lawn Cemetery, Middlebury. Memorials may be given to Richville United Methodist Church of Ligonier.

To send flowers to the family or plant a tree in memory of Lester Dean Miller, please visit our floral store.

A Memorial Tree was planted for Lester Dean