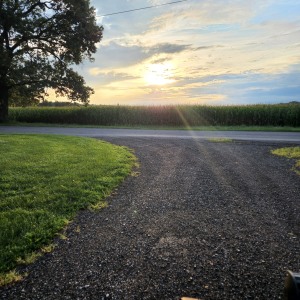 Emma Ruth Hershberger, 75, of Middlebury, died at 1:38 pm on Wednesday, August 3, at her residence. She was born on July 31, 1947 in Goshen, to Harvey and Verna (Coblentz) Troyer. On April 29, 1967 in Middlebury she married Samuel J. Hershberger, he survives. Survivors in addition to her husband are two sons, Brian Hershberger of Middlebury and Chad (Cassandra) Hershberger of Bristol; daughter-in-law, Jennifer Hershberger of Indianapolis; three grandchildren, Madeline Hershberger, Logan Hershberger, and Liam Hershberger; sister, Rachel (Kenny) Chronister of Owasso, OK; five brothers, Lloyd (Millasa) Troyer of Osceola, Harvey Troyer, Jr. of Washington, Jerry Troyer of Jupiter, FL, Glenn (Connie) Troyer of Goshen, John (Donna) Troyer of Mishawaka; brother-in-law, Dale Love of Michigan; two sisters-in-law, Connie Troyer of Union, MI and Sheila Troyer of Riverton, WY.  She was preceded in death by her parents; sister, Irene Love; three brothers, Wilbur, Mose, and Howard Troyer. Emma worked as the secretary and treasurer for Hershberger Steel Erecting, Inc. for over 30 years. She loved cooking/baking and recording cassette tapes of her favorite radio/television evangelist’s. She was attending Crossroads Community Church. Visitation will be from 1:00 - 4:00 pm on Sunday, August 7, at Miller-Stewart Funeral Home, 1003 South Main Street in Middlebury. There will also be a half hour of visitation prior to the 10:00 am funeral service on Monday, August 8, at Miller-Stewart Funeral Home. Services will be conducted by Glenn and Jay Troyer. Burial will be in Miller 8 Square Cemetery, Goshen. Memorials may be given to the Middlebury Food Pantry.

To send flowers to the family or plant a tree in memory of Emma Ruth Hershberger, please visit our floral store.

A Memorial Tree was planted for Emma Ruth