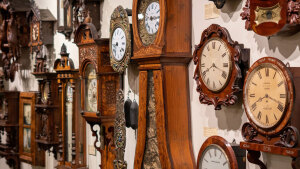 David L. Harding, 82, of Middlebury, passed away at 3:00 pm on Thursday, September 2, at his residence. He was born on January 14, 1939  in Kendallville, to Dale and Annaetti (Merkling) Harding.  On January 15, 1977 in Plymouth he married Danice Gilley, she survives. Survivors in addition to his wife are three daughters, Cheryl (Rob) Newland of Mishawaka, Tori (Kerry) Dankert of Walkerton, Tonia (Tony) Ehret of Middlebury; two sons, Tod (Susan) Richard of Orange Park, FL and Michael (Jill) Harding of Indianapolis; 14 grandchildren; six great grandchildren; and his brother, Larry (Janice) Harding of Granger. He was preceded in death by his parents and his son, Ty Richard. David was a graduate of Central High School in South Bend and then entered his career of being an Optician for 44 years. He was a member of the National Association of Watch and Clock Collectors and the Sons of the American Revolution (SAR) of Mishawaka. He enjoyed repairing clocks, tinkering with gadgets around his home, and studying genealogy. There will be one hour of visitation prior to the 2:00 pm memorial service on Thursday, September 9, at Miller-Stewart Funeral Home, Middlebury. Services will be conducted by Pastor John Hogsett. Burial will be in Corunna Cemetery, Corunna. Memorials may be given to Goshen Home Care & Hospice.

To send flowers to the family or plant a tree in memory of David L. Harding, please visit our floral store.