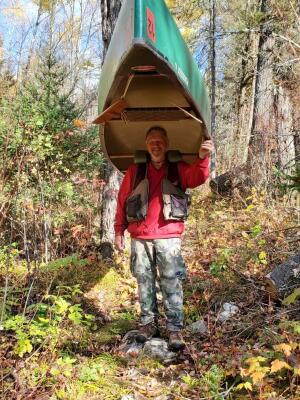 Charles “Chuck” Bontrager, 77, of Bristol, went to be with his Lord and Savior peacefully at 1:30 pm on Friday, October 8, at Goshen Health Hospital. He was born on April 4, 1944 in Midland, MI, to Vernell and Viola (Slagell) Bontrager. His family moved to Fairview MI. when he was young where he met the love of his life, Patricia Yoder. They were married on June 12, 1965 in Comins, MI and she survives. Chuck and Pat then moved to Indiana where they raised their family. Survivors in addition to his wife are three sons, Todd (Steph) Bontrager, Jamey Bontrager, Jack Davis; seven grandchildren, Morgan, Mikayla, Shelby, Chase, Charles “Charlie”, Jordan and Carson Bontrager; his mother; three sisters, Connie (Don) Parker, Terri (Phil) Blosser, Jan (Dave) Joldersma; brother, Jay (Jan) Bontrager. He was preceded in death by his father. Chuck's main mission in life was to give glory to God and to build relationships. He was known as a hard-working man with a creative mind, which he had used in his many business adventures. His legacy of love and faithfulness to others showed in every aspect of his life; whether it was spending time with his sons and grandchildren on the family hobby farm or the over 30 years of trips to the Boundary Waters with family and friends. Due to Chuck’s deep love of community, he became involved with The Table Gathering; the family requests that any memorial contributions be given to The Table Gathering to be used to support the future needs in our community. Visitation will be from 12:00 to 3:00 and 5:00 to 8:00 pm on Friday, October 15, at Miller-Stewart Funeral Home, 1003 South Main Street Middlebury. Funeral services will be at 10:00 am on Saturday, October 16, also at the funeral home. Services will be conducted by Pastor Chris Garner. Burial will be in Oak Ridge Cemetery, Bristol.

To send flowers to the family or plant a tree in memory of Charles "Chuck" Bontrager, please visit our floral store.

A Memorial Tree was planted for Charles "Chuck"

Your browser does not support this video format. You should be able to view it in Chrome, Safari or Internet Explorer.