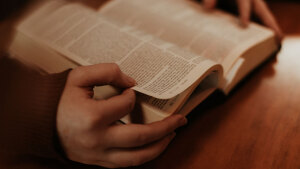 She was preceded in death by her husband; parents; a grandson, Benjamin "Benji" Eash; a sister Edna Godshell; two brothers, Atlee Jay and Glenn Miller.

Betty chose to follow Jesus at an early age and was baptized at the age of 14.  She was a member of Living Hope Fellowship in Goshen.

She served beside her husband, who was pastor of Griner Mennonite Church, for 40 years.  She spent much time caring for the congregation through various way, including visiting and hosting many people in their home.  She was also involved in Women's ministries, writing Bible lessons and leading Bible Studies.  During this time and while raising their children, she also began and built a home business which helped sustain her till her last breath. After her mother's passing, she became the caregiver of her handicapped brother Dale and cared for him as long as she was physically able.

She was a homemaker, a mother & grandmother and opened up her heart and home to friends, family and many guests over the years. She loved tending her beautiful flower gardens and hosting garden parties. She also had lots of fun playing table games with her friends, children & grandchildren, and was quite the competitor.

Visitation will be from 2:00 to 5:00 and 6:00 - 8:00 pm on Friday, April 1, at Griner Church, 12418 CR 20 Middlebury. There will be one hour of visitation prior to the 10:00 am funeral service on Saturday, April 2, also at the church. Services will be conducted by Pastors Jason Miller, Josh Berkshire and Mike Troyer. Burial will be in Griner Cemetery, Middlebury.

She was loved and will be missed by many.  Memorials may be directed to Village to Village Intl, a ministry Betty's grandson helps to lead, that offers hope and healing to vulnerable children, youth and their caregivers.    https://www.villagetovillageintl.com

To send flowers to the family or plant a tree in memory of Betty D. (Miller) Troyer, please visit our floral store.